“How Much Protein Should I Eat?” Answered!

This question will continue to spark debate for ages.

What’s truly the adequate amount of protein needed per day?

Protein intake plays a factor in the types of foods we have room for in our diets.

One school of thought is having a high protein intake, especially when cutting.

Generally, these folk adheres to the 1-1.3 gram per pound of body weight recommendation  (some even suggest going as high as 1.5!).

That’s a lot of chicken…

On the other side of the coin, there are those who love having their cake and eating it too!

Let me elaborate, this counterculture trusts in the research that indicates lean athletes only require 0.82 grams, of protein, per pound of body weight.

In a world filled with decisions and the bodybuilding media world tugging you in different directions, I aim to lessen the fog on this topic.

In this quick article, I want to briefly cover each school of thought and offer the best solution, in my opinion, to how much protein you should eat.

The Research on the Traditional Protein Route (1.2g/lb)

Traditionally, bodybuilders follow a strict protocol with their food intake.

Specifically, when cutting for show prep, they keep their protein intake high.

Yes, there are some gurus in the fitness industry, who claim to be scientists, pushing the latter figure of that range!

Is there research to support their claims?

The truth is there are a few studies that support a high intake.

There are studies, such as, the McMaster University study which put the high protein intake claim to the test.

Based on their research, they concluded, 0.6-08 grams per pound of body weight is enough for maximal protein synthesis.

Seems quite low, but they duly noted that athletes, who did regular high-intensity training or were in caloric deficits to lose body fat, would need more protein.

The key word there is “athletes.”

Not very conclusive to higher protein intake, such as 1.2 grams per pound of body weight, thus let’s take a look at another study.

Research done at the Auckland University of Technology found that a 1-1.4 gram per pound of fat-free mass (you can use lean body mass as an equivalent) was necessary for athletes who frequently did resistance training and were in an energy deficit.

Protein has a place in fat loss programs because of it’s useful contributions to the body when it’s in a caloric deficit. Included are:

Looking at it from a macro percentage point of view, the macro split is usually 40/40/20, for higher protein intake.

To some, this is a stereotypical approach or a “bro science” way of dieting.

Chicken, brown rice and broccoli anyone?

All kidding aside, a high protein intake allows for some flexibility.

The “Golden Rule” of Protein Intake

In the middle of the protein intake, spectrum, are those who don’t know where to turn.

They’ve read studies and read fitness content that state either low or higher protein is necessary when cutting.

It states that 1  gram per pound of body weight is all that’s required.

This classic rule has been around for decades.

In fact, I’ve used it as a recommendation to viewers of my own YouTube Channel.

I used it because, well, it’s an easy recommendation to give to people.

You can’t necessarily go wrong with this rule, and most people will succeed with it.

I like a different approach, one that allows more carbs. More on this later.

However, you’ll be pleasantly surprised at how much room you have for carbs and fats if you’re coming from a high protein diet.

What about lower protein intake?

Is it just an excuse to eat more “dirty foods”?

How does the “other side” do it?

People who are not professional bodybuilders quite often follow this style of cutting.

We (yes I’m in this category) want to look lean and appealing to the opposite sex.

We want to look strong, lean, and look good in clothes.

Countless studies have shown that 0.82 gram of pound per body weight is enough for protein synthesis and preserving lean muscle mass.

In fact, some suggest a lower intake is optimal!

For example, a study from the US Army Research Institute of Environmental Medicine found that 0.82 grams per pound body weight is the necessary amount of protein needed to preserve muscle mass during a caloric deficit.

You might’ve guessed it, the group who ate a diet consisting of 0.82 grams/lb won the muscle preservation competition.

To someone who’s always done a high protein diet, this could potentially be exciting news!

You can potentially have a new macro split that you enjoy!

A lower protein diet naturally leads to having more room for carbs and dietary fats!

Instead of eating that extra 8 ounces of chicken breast a day you’ll be able to switch that out for some extra potatoes for example!

You might even have room for frozen yogurt, and then some!

Respect the Protein (damn, how “bro” does that sound).

If you choose to go on a lower protein diet then hitting your protein macro will be significant.

If you hit your protein goal every day, then your carbs and fats are left for you to balance out and play with!

The great thing about being on a low (optimal) protein diet is that your hormones will be at healthy levels.

High testosterone levels are a good thing while cutting so you don’t feel like shit!

Both sides have research backing them up.

Not to mention, hardcore followers.

I’m sure people of both camps are reading this article in a fury.

The truth is that both work and people have, and will continue, to prove that they work!

It boils down to what works best for you!

I used not to understand that!

If you know someone or follow someone who gets proven results, try it out for yourself.

Do your due diligence.

Maybe you enjoy your carbs too much, and the thought of sacrificing them for additional protein is too much to bear.

On the other hand, maybe you enjoy meats and could care less about carbs or fats.

For those in the middle, the indecisive folk, a standard solution is to follow the classic Golden Rule.

Classic gym lore has passed on this rule for decades now.

Could’ve been something the “bros” got right!

1 gram/lb of body weight is an excellent option for those who can’t, or won’t take sides on this matter!

You get the best of both worlds and will still reach your goals if you have a sound fitness program in place.

With all that said I’ll leave you with reasons why people go either high or low protein.

This is where things get weird…

There’s an Olympic Strength & Conditioning coach in Iceland who stays at around 6% body fat eating a carb based diet.

Here’s a picture of him from this past Spring.

He gets only about 60-80 grams of protein per day.

The rest of his diet comes from carbs.

His strength, muscle mass, and testosterone levels are all at high levels, eating a diet that many believe SHOULDN’T work.

His diet is mainly starch based carbs and vegetables.

He has been able to maintain muscle mass on this level of protein (for five years).

Again he only gets 60-80 grams of protein per day!

Mark doesn’t even track protein and believes “protein guilt” (yes it’s a thing) is one of the top reasons people have a tough time getting lean.

He isn’t genetically gifted either.

Here’s a head-shot of Mark:

He was 265 pounds on the left and was very active and lifting regularly (again, he’s an Olympic Strength & Conditioning coach in Iceland)

If you want to learn more about his high-carb, low protein & fat diet, click here.

The link above leads to a high carb diet that I’ve been following for quite some time now.

Some of you may be thinking: “A high-carb diet? You mean low-carb diet right?”

If you didn’t know any better, you would think carbs are the top cause of body fat and obesity.

Here’s what is funny.

Carbs rarely get stored as body fat (to any significant degree).

They can cause the fat you eat to get stored as body fat.

It is the dietary FAT that gets stored as body fat, NOT the carbs.

The term for converting carbs to fat is called De Novo Lipogenesis.

Your body typically ramps up your metabolism when you ramp up carb intake to burn off the carb calories.

There’s a study where it took participants 5,000+ calories of carbs each day for days before any significant De Novo Lipogenesis took place.

The participants could hardly do it.

They had to stuff their faces with bagels.

…and every time they increased calories, their metabolism would increase proportionately.

Drastically reducing the fat you eat and replacing those calories with carbs is a simple way to get lean.

Most low-fat diets of the past consider 35% fat as “low fat.”

The magic happens when you reduce fats to 8-10%.

He has teamed with Rusty Moore to create a course based on this exact low-fat approach. 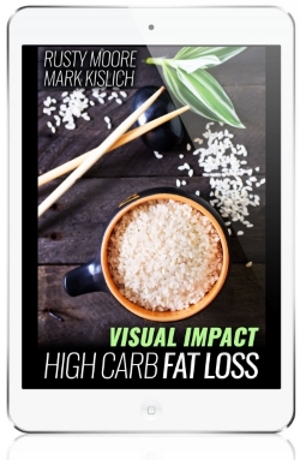 The course, High Carb Fat Loss (link leads to review article of the program in a new tab) outlines how to get lean quickly eating a diet based on carbs like rice, oatmeal, potatoes, bread, etc.

Rusty Moore is a former trainer to runway models.

His “Visual Impact” brand aims at people who want to have maximum muscle definition while still being able to fit into stylish clothing.

He took Mark’s fat loss diet blueprint and turned it into an online course.

Check it out here.

1 thought on ““How Much Protein Should I Eat?” Answered!”